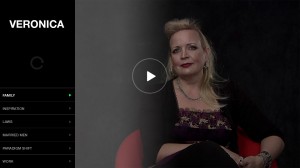 This documentary was in production from early 2013 until October 2014 (aprox 18 mo.), and was exhibited as an installation from October 4th – 23rd, 2014 at Beaver Hall Gallery in Toronto, Ontario. The exhibit opening was part of Toronto’s Scotiabank Nuit Blanche.  To ensure that sex workers felt empowered to share their experiences, the project was developed using an open consent form. An open consent gave each witness the right to vet (approve) the content of the edited interview, as well as the photograph, before it was released to the public. If the content did not represent the witness in the spirit they intended, they could exit the work. (All witnesses vetted and approved the content). 5-7 short vignettes, per witness, were screened on Android OS tablets (total of 52 short vignettes).

( Odalisque, As Archetype, was the working title for the project until the name was finalized in May, 2014 to ‘Sex Worker, Truth & Archetype’).

This is a collaborative documentary installation directed by Esther Buckareff and Barbara Greczny. Barbara holds an MFA in Documentary Media (Ryerson) and a BFA in Integrated Media (OCAD). She was a core member of Symbiosis (1992-1997), a multi-disciplinary artist collective committed to the integration of various art disciplines within the context of site-specific non-traditional exhibition spaces. Her photography and video work have been displayed during Scotia Bank’s Nuit Blanche from 2006-2008. Her photo-video piece Soul Trip 999 (Nuit Blanche 2008) was recently highlighted on the New York based online magazine Sensitive Skin. (See BarbaraGreczny.com) ------------ (For Esther's bio, see bio link in top menu)