by Esther Buckareff added on 1 July 2015, Comments Off on Who is a Jew? , filed under Artistic Process (Israel) 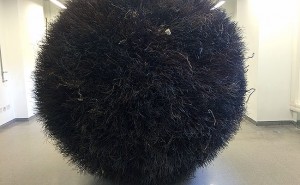 Not sure Doris Arkin was actually thinking this question when she created Anamnesisa, but the philosophy of anamnesis really touches on this issue. In Israel, I get asked this question a lot and I really don’t know how to answer it, “Are you a Jew?” Most Jews seem pretty confident they’re a Jew and they’re confused by my confusion. Yet, I have not found one Jew who could answer this question with any degree of clarity. Who is a Jew? Is this a religious person who practices Judaism? Is it a culture? Is it genetic? Is being a Jew a race? A religion? Who, exactly, is a Jew?

Can a Jew be genetically tested for “Jewish” genes?
See:
How DNA Can Reveal Jewish Ancestry
Russian-speakers who want to make aliya could need DNA test

I decided to check it out and submitted a query through an online form to a genetic lab in Israel. See correspondence below…

There is no genetic test that indicate the religion of  humans!!

Nazi Germany would have love to have a genetic test that indicate a person religion (like Jewish)!!

There is mitochondrial DNA polymorphisms which are more common (but not exclusive) to some of the different Jewish ethnic groups, and there is an 6-12 STR polymorphisms sits on the Y chromosome which are common in “COHANIM”.

Hope this help you.

Esther Buckareff <esther@docfilm.ca>
Date: March 4, 2015 at 9:43:45 AM GMT+2
To: Dani Bercovich <danib@GGA.ORG.IL>
Subject: Re: genetic test that indicate the religion of  humans

Hi Dani,
Thanks for clarifying. It is fascinating to me that you refer to being Jewish as a religion vs a race or cultural group like Scottish, Irish, East Indian, North American Indian, Asian, etc. etc. It begs the question “Who is a Jew?” which then brings up a multitude of sociopolitical issues that concern Israeli laws regarding immigration, land rights, and so on. Does this mean that non-religious Israelis are not Jews? Does it mean that someone whose ancestors were religious but they, themselves, are atheist – or converted to Muslim or Christian, etc., are now no longer Jewish? Isn’t something like 50%, or more, of Israelis non-religious? Does this mean they are not Jewish? According to your point of view, the answer is yes. At least half or more of Israeli citizens are not Jewish.
I am a documentary filmmaker and I would love to interview you on the issue of Who is a Jew?
There are several companies in the U.S. that are selling genetic testing to determine if a person is a Jew or not (googling it produces the company names/prices). I’ve heard your point of view stated elsewhere but there are others who dispute it by claiming that there are DNA tests to determine whether or not a person has Jewish ancestry – AND that Jews are genetically superior.
Btw… Do you know of a company in Israel that offers  DNA testing for COHANIM?
Best,
Esther
Sent from my iPhone

Hi Esther
The GGA lab perform the COHANIM test as a “recreation genetic test”. This cost 1850 NIS and the TAT is 5-7 weeks
As for the genetic labs in the US which offer tests to find “Jewish origin”, this is exactly like 23andme test, which is Google “BELOF” way, of collecting DNA samples for low price to sale it after to drugs companies for there research on new drugs.
There are some genetic variants, which affects health, like the mutations in the BRCA genes which affects Brest or ovarian cancers, but these mutations are also found in non Ashkenazi or non Jewish women’s as well. Finding only one of the common Ashkenazi mutation in a human dose not automatically defend that this person as Jewish. But if you find a lot of these mutations in one person, then it is more likely that there is Jewish inheritance in this family.
In GGA we have a genetic test that screen 94 most common mutations in the Jewish Israeli population (all ethnics: Ashkenazi and non Ashkenazi). We found that about 15% of the population is a carrier of one of the 94 mutations. Some times, we found peoples that harbor three or four of these mutations (they are probably more “pure Jewish origin”).
Hope this helps
Dani.

I’m still not clear.  Plato would say I know the answer to this question, I just can’t remember.