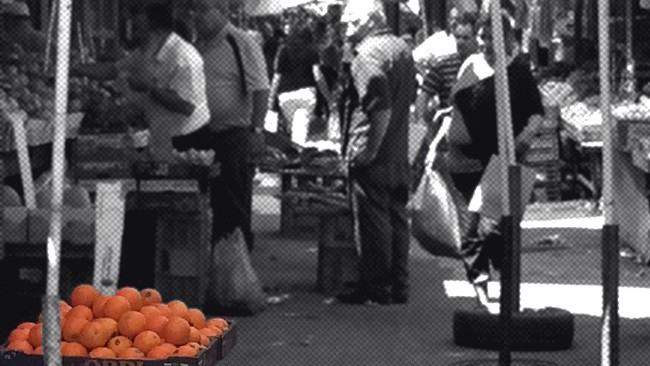 by Esther Buckareff added on 20 July 2015, Comments Off on Triggered to Action , filed under Artistic Process (Israel)

The Big Brother Show is a big deal here. Everybody watches it. It’s huge with the 30-something crowd, “Sometimes its nice to just watch something and not have to think.”

In conversation with a 30-something vegan couple

A year ago, the woman who won the show was vegan. Her diet preference had a big influence on her audience; many followed her lead and became vegans, “That’s how being vegan became popular in Israel.” Since the vegan woman’s appearance on Big Brother, veganism has spread rapidly throughout Israel and continues to grow. Most restaurants have vegan items on their menu, and many ice cream shops have vegan flavours. “It really became big in the last year and it’s spreading more and more.”

Vegans are evangelists. They love to spread the word and win you over. It’s like a religious cult. They are absolutely convinced they’ve made the right diet choice. And so should you.

“Why did you become a vegan?”

“Well… it’s both a morality issue and a health issue.”

“Are you sure? You’re eating. I don’t know if you want me to tell you while you’re eating.”

“Well, first, it’s about how they take the baby cow away from the mother cow…”

“Is that the spiritual reason to be vegan?”

She slices her throat with her left index finger.

“They often kill the baby,” her husband adds.

She continues, “When they milk the mother, they pull her titties and bruise them. Can you imagine if they pulled your titties like that until they were bruised?”

“How do you know it hurts the cow? Maybe the cow feels things differently than humans do.”

“No. You could see the bruises. They milk the cow three times a day and she gets sores that fill with puss and this puss goes into your milk. Can you imagine? You drink this puss.”

I’m munching on a piece of toast with cream cheese and avocado. I glance at the cream cheese as I take my next bite. OK. Eating puss is not an attractive thought. One point for the vegan.

“And then there’s the hormones. The cow is pumped full of hormones and these hormones go into your milk.”

“What do the hormones do to a person?”