by Esther Buckareff added on 4 October 2015, No Comments on Garden of Eden , filed under Artistic Process (Israel)
0 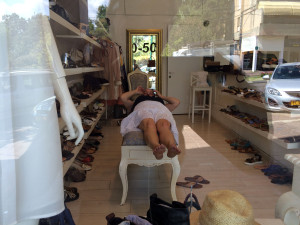 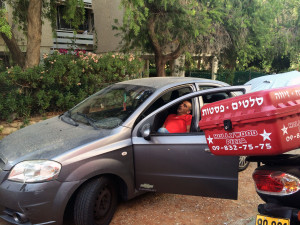 Israel’s perpetual state of war has manifested into a civilian culture of lawlessness, chaos and anarchy; an utter lack of empathy and apathy are a ‘de facto’ state of mind that undermines the country’s economic viability and diminishes any plausibility for a functioning democracy.

During the most critical years of adolescent development, when the foundation for rational thought in adulthood is paved, and young adults in western democracies leisurely wade into their first year of university or college – soon to discover the boundaries and perils of personal freedom – Israeli young adults experience a sudden and dramatic loss of freedom through mandatory army service – an environment where they are aggressively indoctrinated into a cult, a war-time ideology that reflects the aspirations of religious and political opportunists.

Permeating into every facet of civil society, the soldier and civilian are merged into one mind of subjective servitude and denial. Sedated by fear of extinction, and rationalizing human rights abuses against an ideology of blind patriotism, a nation obediently follows. This ideology will be taught to the offspring, repeating a cycle of abuse and ignorance that spans generations and justifies bloodshed, killing, theft and a total destruction of the human soul, with a security rhetoric from the army’s vain pulpit that manipulates and neutralizes impressionable minds.

A soldier is taught to act on a General’s orders. When a soldier is released from service, their rank and performance in the army determines their station in civil society.  Dissent and argument is discouraged by former military leaders who transition into politicians and greedy corporate leaders. Crippled survivors eagerly grasp for salvation in courtrooms wrought with corrupt judges, who smile kindly as they pocket cash from criminals while placating the wounded with illusion.  Hatred, racism and bigotry are justified by a Holocaust that robbed, starved and annihilated men, women and children.

Religion and politics are fused into an antiquated measure to identify Jews without a geographic marker.  Regulations and religious laws that violate the tenants of Basic Law are vigilantly enforced, while laws that protect the individual and guard democracy lapse into obfuscation. Public discourse is silenced by a gross lapse of ethics in media; Parliamentary speakers warn against the voice of objection, lest it undermines the solidarity required for Generals to act with impunity.

The army, as civil society, terrifies its collaborators. Yet, its intimacy comforts from the cradle. Blind, deaf and mute, soldiers descend from the nation’s borders to be seamlessly absorbed into the ruinous state of corruption, thuggery, lawlessness, and oppression that they are sworn to protect.

This is the Garden of Eden. Against a barren landscape stripped of every democratic ideal lies a nation of passive victims. Asleep. 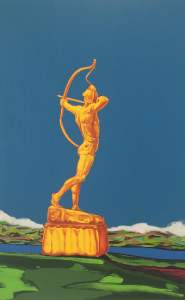 An archer, a soldier, an acrobat, a mariner – these are some of the incarnations of “The Man” in the paintings. Matan recounts that he had to drop out from an elite unit at an early stage of his military service due to health problems; at first a source of anguish, this later brought about a transformation in his self-perception, for which he is now grateful, and which put him on the path to art. Matan attended my painting class at Bezalel for three years, and I can attest that I have never met a student who applied military discipline (in the best sense of the term) to art in the same way. I also used to say that I am a soldier in art. It seems that at least in that respect we are brothers in arms.