by Esther Buckareff added on 4 August 2015, No Comments on שירותי-סיכה-ורחיצה , filed under Artistic Process (Israel)
0 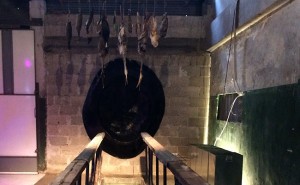 July 9, 2015. I pull into a gas station outside Ramla that offers a free car wash with fill up. Cars get dusty pretty quick in the desert, so on the odd occasion that I’m near this particular station, I usually make a point of filling up. While the price of gas bottoms out everywhere else, it costs double or triple to fill a tank in Israel  (about $100 CDN for a small, economy-sized Suzuki).  I park and look for an attendant because the instructions on the pump don’t display in English. Usually, the attendant doesn’t speak English, either, prompting me to communicate using one or two key words. For example, “Full. Cash.” Or, “Full. Credit Card.” Or, for a specific cash amount, I show him or her the bill.

Today is different. The attendant’s perfect English catches me off guard and I compliment him from the driver’s seat while he fills the tank, “Wow,  your English is really good, were you born in Israel?” Yes, he was. He explains that he worked very hard on his English because he wants to emigrate to Canada.  Israel is bleeding its 25-40 year- old demographic; the cost of living is very high – even with good jobs, people struggle to buy food and pay for housing. Social justice issues like the Palestinian conflict and the African refugee crisis, a corrupt police force and subsequent lack of law enforcement, the archaic integration of religion into state laws, an obligation to serve in the army and often the PTSD that accompanies it, as well as living in a perpetual state of fear and war, has discouraged an entire generation. As today’s attendant assumed, English speaking Israelis often guess correctly that I’m Canadian (likely due to my unfortunate use of ‘eh’). Sticking the pump into the tank hole, he locks the handle to pour until full, leans against the rear door of my car, and says, “Can I ask you a question about Canada?” Eager as a beaver to be a cheerleader for the world’s greatest melting pot, I encourage him to ask me anything. He gets straight to the point,”Is it true that Jews are discriminated against in Canada?”

I immediately say it isn’t true – a knee jerk response after living in Israel for half a year and witnessing a new breed of racism – an anomaly that spares no one, including Jews. Fueled by ignorance and justified by religion and fear mongering, Israeli-style racism has morphed into a wild and uncivilized creature that rivals werewolves and vampires.   You can not compare Canada to Israel. No. Way. The attendant offers an example to justify his question – in Israel, anyone can walk around with a Star of David around their neck and nobody cares. In Canada, a person cannot publicize they’re a Jew. Is this true?

I rethink my answer.  Canadians fight for the rights of all cultures to wear whatever clothing and jewellery they want, but wearing a Star of David could get your ass kicked. I cede to his point, “You’re right,” I say – “In Toronto, the synagogues and Jewish community centers require security guards. Jewish facilities are vandalized on a regular basis. Places like the JCC receive multiple bomb threats every day.” I recall a Jewish instructor at the university telling me about the time she rolled up the white film screen in the classroom only to reveal a large swastika painted on the chalk board.  And the time I disembarked at Pearson with a full flight of Orthodox Jews arriving home from Israel immediately after Passover.  The large woman at customs refused to let me pass until I removed the Israeli visa from my passport. I’m sure Canadian Jews could fill a library with examples. The attendant wrinkles his nose and forehead, squints his eyes, and looks at me in confusion and disillusionment. The pump jolts to a stop.

Why can the greater public separate most human beings from the ideology of whatever oppressive regime governs his or her homeland, but they cannot separate a Jew from Israel’s oppressive, misogynistic and racist government? I think most people, outside Israel, believe Israel is actually a democracy, when it is not. They believe the majority of Israelis choose their fate – as a democracy dictates – when they do not. It seems rational to blame the individual when their homeland is a democracy, because that individual has the freedom to choose their government. But when a person’s homeland is an oppressive dictatorship, or ruled by religious laws (producing the same outcome as a dictatorship), the public is more forgiving of the individual.  Israel does not separate church and state. This very significant socio-political fact completely removes the probability of any kind of democracy. Israel is not a democracy.  No country can function as a democracy (or even a dysfunctional democracy)  if religion dictates socioeconomic policy, establishes law, governs the courts, and so on. Religion dictates morality, whereas ethics governs a democracy. Morality is fluid and adapts to whatever religious precepts benefit – or profit – the individual. Morality justifies injury to human life – with impunity. Ethics forbids it. A democracy cannot function if a state is governed by morality instead of ethics. Ethics and morality cannot coexist in government because its objectives contradict.

When asked, most Israelis think religion and state will never be separated (“It’s impossible! Will never happen!”), even though they wish it would be (I have not met one Israeli who actually believes it will happen in their lifetime).  Why is that? Why do Israelis believe it is impossible to separate religion from state? I could be wrong, but I think the reasons for doubt come full circle to the Jewish identity crisis, ‘Who is a Jew?’ If a Jew is identified by a religious standard (else they are not a Jew), then Israel feels a warped obligation to integrate religion and state as a means to identify Jews. In doing so, Israel has created a religious state that is no different than any other Muslim state in the Middle East that is governed by Sharia Law .

On the other hand, if by some act of God, Israel became the poster child for democracy, human rights, and economic prosperity – would Jews still encounter the antisemitism that exists in countries like Canada today? Many Jews would say, Yes. Look at Hitler, before Israel even existed – antisemitism has been going on for hundreds of years. People have always hated Jews.

I’d like to think that human evolution is progressive – irrational ideologies that pollute the human race can be washed and cleaned. Surely, there’s a point when even the most obtuse unbelievers are compelled to mentally restructure.