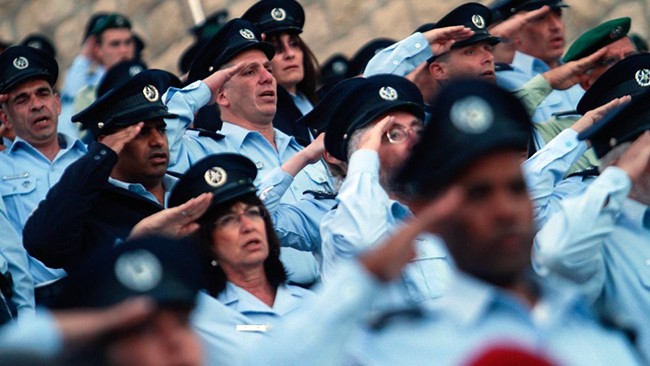 by Esther Buckareff added on 1 August 2015, No Comments on Cops for Hire , filed under Artistic Process (Israel)
0

Israel’s local police do not enforce the law. Criminals pay police to protect them from a terrorized public. The police act with impunity, often citing “the public’s best interest” as an excuse to dismiss complaints filed by victims. Israeli police abuse their authority to threaten and intimidate victims of crime with arrest, jail and bogus charges. Complaints against criminal activity are either dismissed, or buried under lies and bureaucratic shenanigans. Israeli institutions that investigate police behaviour, such as The Police Internal Investigations Unit (Machash), and the Israel Police Public Complaints Unit, are a sham – a facade to placate media.  To appease an increasingly wary public, these institutions cherry pick issues to investigate that generate the most publicity. Complicit, the Ministry of Justice turns a blind eye.

July 29, 2015 – I’m lunching  with a 23 year old woman whose mother and father are both police officers. She comments on my observation, “I think because police officers make so little money, and the cost of living is so high in Israel, it’s easy to bribe them. They need the money.”

4pm, May 26, 2015 – I’m waiting at the curb to cross a side street off the main strip in Herzliya. Baking in the sun with no cars on the road, I am tempted to cross ‘on red’. Standing beside me is a ’35 year-oldish’ police officer, also waiting to cross. I am agitated by the cop’s presence beside me. The more I think about his lackluster badge, the more impatient I become. I finally turn to him and say –  in a tone that implies that I wish you would – “Will you arrest me if I walk on red?”  “I’ll cuff you and take you to jail,” he replies. “OK.” I offer my wrists. The light changes, we cross the road, and the cop invites me to hang with him for an hour. I accept. He explains that he just finished work and had a long day. He’s on his way to synagogue but has an hour in between to run errands and grab a bite to eat. Technically, he’s not allowed to hang out with me in uniform but we’re going to do it anyway.

As we walk, we chat about religion. The cop explains he “returned to religion” two years ago. The first stop we make is an old bookstore where he asks me to help him choose two yarmulkes for himself. I pick a solid black one but the cop prefers a black one with a white motif along the border, and a white one with a geometric pattern. He buys the two, folds them into his pocket and we head out.

Next, we walk to a falafel stand and order two falafels with lemonades. To the cop’s horror, I pay the 30 shekels for lunch. As we sit down, he explains to me that paying for his lunch was emasculating and that he has to pay me back.

As we eat our falafels, the cop responds to my observation of Israeli police. Yes, he says, of course he’s aware the police are corrupt. They’re corrupt because there are no checks and balances. The police are not afraid of Machash because they know Machash is not a threat. “So its very easy for a police officer to take bribes and be corrupt,” the cop explains. “All the police do it.”

The final stop is the synagogue. I suggest parting ways at the cross-walk near the falafel stand but the cop prompts me, “Come on. I want to show you the synagogue. It’s the largest one in Herzlyia.”

April 22, 2015 – Israel’s Independence Day. I’m at a BBQ chatting on the balcony with a tall, muscular guy who has ‘mafia connections’, regarding the state of Israeli police. In response to my observation, he explains that each city’s police force reports to a specific mafia boss. In essence, the Israeli Police Force is owned by the mafia. If a person is victimized by criminals connected to the mafia, that person must seek assistance from a mafia boss who has greater authority than the mafia that controls the police in whatever city that person lives in. Essentially, Israel is a mafia state. 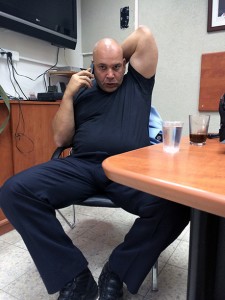 March 5, 2015
Chief Tal of the Petah Tikva Police on the phone with Hod HaSharon lawyer, Amir Yeckutiel, asking him to step up and help him threaten and silence a victim of police corruption.

Chief Tal has a lucrative deal trading favours for favours with lawyers like Yeckutiel. Tal sends Yeckutiel customers (people showing up at the police station without a lawyer, or, if they have a lawyer, Tal sells them up on a lawyer whom he promises could help them navigate police criminal activity) and Yeckutiel returns the favour. Tal’s objective is to protect his criminal bosses while Yeckutiel strives to make as much money as possible. To maintain three degrees of separation, Tal’s good friend and former colleague on the police force, lawyer Yaron London, works for Yeckutiel’s law firm as the go-between Yeckutiel and Tal.