by Esther Buckareff added on 4 July 2015, Comments Off on Cave Man , filed under Artistic Process (Israel)

On April 22nd, 2015, I embarked on a mission in search of caves. It was Israel’s Independence Day, a national holiday, so I checked the web before heading out to make sure that Beit Guvrin-Maresha National Park was open until at least 5pm. After visiting Avshalom Cave (also known as Soreq Cave or Stalactites Cave), I arrived at Beit Guvrin around 3pm and was greeted by 4 or 5 park attendants. One of the guys leaned out the park shack window and told me they were closing the park at 3:30pm, which made it too late for me to enter. Disappointed, I pleaded with them, pointing out that the website didn’t mention a different closing time – and that it was my birthday. “Pleeeeease?” I begged. One of the young park attendants suggested I visit a different park, ‘Hirbet Midras’ at Park Adulam, where he said I would find some interesting caves and ruins. It was approximately fifteen minutes away and didn’t close until 10pm. A fair compromise, I handed him my phone so he could GPS the location for me. I then turned the car around and set off on a hunt for some ruins dating back to the second temple.

Before exiting the park, I sent my good friend Shmuel in Canada (an Israeli/Canadian who is also my Hebrew teacher, tourist guide, and educator on Jewish customs) a text message on Viber telling him my change in plans. I included the GPS marker. He replied with a voice message that irritated me as over-protective and paranoid. So I ignored it. 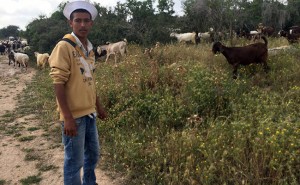 I followed the GPS until the road narrowed into a dirt road and came to an end. There was no ‘visitor’s center’, park authority shed, parking lot or directional signs beyond a park sign that I had passed a few minutes earlier. I turned the car off, locked it, grabbed my back pack, bottle of water, and started hiking toward the GPS marker along a dirt path.

About 250 feet from the car, a young goat herder emerged with a flock of goats. He looked about 14 years old. I asked him if I could take a photo of him with his goats and he obliged. In broken English, he asked me where I was going and I told him I was hiking toward some ruins. He then offered to take me to the ruins but I politely declined, mentioning that I had the GPS to guide me and that it didn’t look like they were too far away. As I turned my back and started walking away from him, he jumped me from behind and tried to wrestle me to the ground while attempting to kiss me on the lips. Startled, I shrugged him off my back like a tissue. He was thin, light, and shorter than I. As I picked up my sunglasses, which had gone flying off the top of my head, I  yelled, “NO!” and held my arm out in a “Stop” position. He started moving toward me again, and again I yelled, NO! Not knowing if he had a weapon, or if he would try to jump me again, I aborted my mission and walked backwards toward the car.

After exiting the park, I pulled over, got out, leaned against the hood and pealed an orange while I contemplated –  How did Shmuel know? And if Shmuel can predict something like this from Canada, what are the greater implications? Damn.

A week later, on May 30th, an acquaintance texted me on Whattsup…