by Esther Buckareff added on 2 July 2015, Comments Off on Basketball , filed under Artistic Process (Israel) 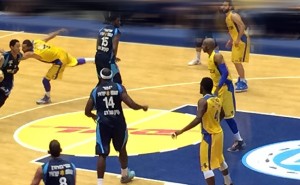 On June 3rd, 2015, I scored three tickets from a friend to attend a Maccabi Tel Aviv basketball game against Eilat. She was out of town that day and couldn’t join me.  Since it was the semi-finals, I was able to convince a male acquaintance – who was more of a ‘football’ fan than a basketball one – to come along. He then invited one of his friends for the third ticket. Both guys were about 32-35 years old, had good jobs, were educated, well traveled, and generally kind, polite and accommodating.  So the three of us set out around 7pm to attend a game that started at 8.

En route, the guys decided they wanted to stop for some fast food. So we pulled into a pizza joint, parked on the sidewalk, and ran in to order a cheese pizza. Two minutes later (the cheese pizzas were ready and boxed) we brought the pizza outside, sat around an outdoor table a few feet from the car, and began to wolf it down. By then, it was about 7:45 pm, but we were only a block or two from the stadium.

As we were eating the pizza, his friend commented on the neighborhood. We were clearly in a very poor district of Tel Aviv that housed a large population of African refugees.

See how many niggers there are in this neighborhood? he said.

That’s really not an appropriate way to call anyone, I responded.

What do you call them? He asked.

You can call them African Refugees or blacks. They’re black your white. It’s fine.

They should go back where they came from, he responded indignantly.

They need help, I replied.

Well, they’re not gonna get help here, he retorted. The government brought them to this neighborhood and dumped them. Then they expected the people who live here to adjust.

Once upon a time, I said, the Jews needed help, too. They travelled from shore to shore in ships, looking for help and were turned away. Some were forced to return and were massacred by the Nazis in concentration camps because nobody wanted to help. It is our DUTY to help them. Look around. Is this how you treat a guest in your home? Israel should be ashamed of itself for its treatment of people in crisis who came here for help.

The last slice was quickly wrapped into a napkin for the road, we piled into the car and then drove to the game in silence.