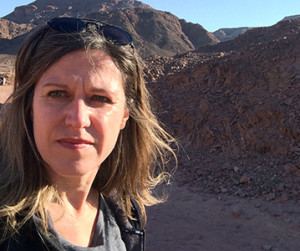 As a documentary media filmmaker, Esther  deconstructs controversial issues by using ‘the interview’ with an open consent form as a research method to reveal ‘truth’.  Her work explores the use of empathy and gossip as catalysts to facilitate synchronicity between the greater public and its counter-publics, with the objective to transform passive viewers into collaborators and participants of the work.

Esther has an MFA in Documentary Media (Ryerson),  BA in Political Science (UWO), Certificate in Film Directing (Cuba, EICTV), Teacher in Adult Training Certificate, and a Diploma in New Media Technologies. She worked for ten years with internet technologies before entering documentary media. Prior to her career in IT, she was employed as a ladies wear import buyer for Hudsons Bay Company. In 2012, Esther won the MADA award for Best Documentary (Children’s Issues) for Powerful As God at Toronto’s Commfest Film Festival. In October, 2014, she exhibited a documentary gallery installation on sex workers at Scotiabank Nuit Blanche. From January 2015 – 2016 she documented land theft in Israel (proper). To better understand the environment, she made notes of her observations, interactions and experiences in Israeli society (The Artistic Process, Israel Project). Between 2016 and 2018 she documented corruption in the Canadian and US criminal justice system, observing bribes and payoffs in the courts between the police, lawyers, judges, the DA’s office in the US and the Crown Attorney’s office in Canada.